St. Jude's Home - A Home for the Homeless 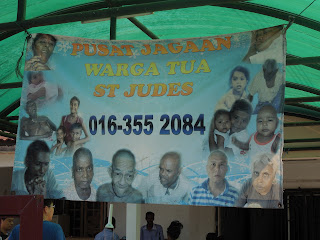 28 July 2012  -  With the recent highlight on the homeless and the controversy on soup kitchens and feeding programs, we and our good friend, Chew from 1Month1Charity found ourselves at a Home in Shah Alam, that meets both the needs for food and shelter for the homeless. Pusat Jagaan Warga Tua St Judes was founded in 2009 by Father Paul Monash and takes in the homeless found loitering in the streets, those abandoned by their family and even patients referred by the local General Hospital. Some with memory loss, some mentally-ill, stroke victims and even those spurned by society, St. Jude’s Home open its arms to them all.  It is currently run by Mr Ravi and his wife, and sustaining on the kind generosity of the public.  A church pays for the rental of their premise; a single-storey corner house where there are about 32 people living in packed condition. Apart from the elderly folks, Mr Ravi has also taken in 4 kids, abandoned by their families and cared for them just like his own.
We dropped by a Wholesale Market on the way to the Home and due to 1M1C’s generous contribution, ended up with 3 trolleyful of wet and dry grocery, vegetables, diapers, detergent etc.  An additional 10 cartons of eggs and some stationery items, contributed by two of Hubby’s colleagues, along with 10 sponge cakes - treats from Hubby completed the day’s delivery.  Not to be left out are our kids’ “Goodie Bag” containing snacks, chocs and lollipops, which never fail to bring smiles of glee from the children.

On arrival, we were warmly welcomed by Mr Ravi and his wife.  With the help of a few of the Home's residents, our two SUV’s load ended up in the porch in no time at all.
﻿﻿﻿
﻿﻿After the initial formalities, we were given a short tour around the place by Mr Ravi.  Due to the heavy cooking, the kitchen is located outside the house. The interior of the house is bare of furniture except for the master bedroom and the living room area, where beds are placed to cater for the sick and invalid.  A few well-used donated couches placed in the porch area served as their living room.  The other rooms are bare except for some woven mats. Mr Ravi explained that these old folks have incontinence problem and often soil their mattresses which are tedious to wash and dry.
﻿﻿﻿
﻿﻿
﻿﻿
A small plot of idle land at the side of the house was cleared away and turned into a small vegetable garden.  Chicks and ducklings are reared within the compound of the house.
﻿ ﻿﻿ ﻿﻿
We were given a brief description of each of the resident’s health condition and how they ended up there.  Majority of the residents which were picked up from the streets, the rest are either abandoned by their kids or even their husbands. The kids were left there by parents who never went back.  On a positive note, it was rather heart-warming to see the residents assisting the sick and old with food and drinks.  According to Ravi, everyone looks out for each other here. ﻿


﻿﻿
The sunny weather outside is a contrast to the atmosphere within the house, where an air of gloom prevails. The sick and the invalid lay helpless in their beds, the mentally-ill walked aimlessly talking to themselves, the old women sat on the floor staring outside, loneliness etched on their faces, longing for the family members who never return …
﻿﻿St Jude’s Home not only provides shelter and food to these people but it is also a place where the homeless have a place to belong to, where the abused can feel safe and secure, the abandoned gained a new family and the sick well taken care of.  Most importantly, all these people, regardless their age or background are respected, loved and cared for as part of St Jude's big family.
Posted by Purple Lotus at 11:12 PM